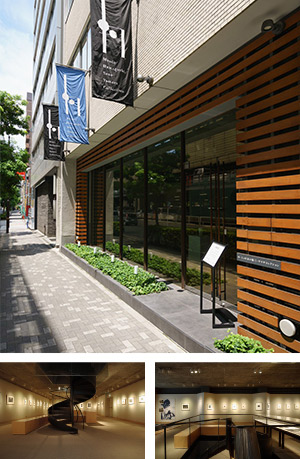 The only art museum to collect and permanently display the works of HAMAGUCHI Yozo.
Founded in November 1998 by the Yamasa Corporation

HAMAGUCHI Yozo was born the third son to Hamaguchi Gihei, the tenth generation head of Yamasa Shoyu (soy sauce), a company with a 350 year history. His father, Gihei, collected and studied paintings of the southern school. Tracing back five generations, one will also find Hamaguchi Kansuke, a painter of the southern school who was active during the later Edo period. This indicates that the Hamaguchi family generated many talented artists.

HAMAGUCHI Yozo developed a unique etching technique known as color mezzotint and used this superb technique to fascinate many people with the tranquility of his work. He returned to Japan in 1996 after spending many years overseas in Paris and San Francisco. This art museum was established with his approval to permanently display many of the pieces he brought back with him.

We are looking forward to your visit.
Access information is available here.